Gate and I have had somewhat of tumultuous relationship throughout the course of its first and second seasons. There have been few shows out recently that have made me feel such excitement and expectation. Unfortunately as you all know, these feelings often lead into some level of disappointment, which will be a key word for the remainder of this review.

Let me stop you now in case the title of the post didn’t key you off already; I will be talking about season two in this review, so if you have yet to watch the first half of Gate, head over here to the review Carlos wrote on that. Make sure you come back though, unless you want to hurt my feelings. I should also clarify that Gate is streaming on Crunchyroll, and they do not have the seasons separated. Consider season one as episodes 1-12 and season two as 13-24.  Also, this review may contain some minor spoilers, which i will keep within reason, but if you are spoiler sensitive, just scroll to the bottom for a summary and score. The second season of Gate started things off pretty much exactly how they left off. Yao the dark elf chick is trying to get Itami and his gang to vanquish the fire dragon that’s threatening her people, and the JSDF is being all perfect, and establishing roots in the special region. Meanwhile, evil princes are raping bunny girls….

Plenty of things happened in the opening episode of the second season, and I’ll be honest, the show initially blew me away with the sheer overload of animation, characters, and developments. All everyone was talking about was Zorzal though; a bad guy prince who quite literally just appeared from behind a curtain with the blatant intention of capturing the ire of every otaku on earth. Raping bunny girls is a sure way to do just that, and while it may have been a super cheap method, it was certainly effective and disturbing to many. So, you’ve done it Gate; while the materials used were cheap and flimsy, you’ve built a villain. A good villain would have gone a very long way with this show, but unfortunately that’s not what we got. Zorzal is a bumbling idiot, and the show goes out of its way to make that point frequently. Gate desperately needed someone or something to pose an actual threat to Itami and his gang. We got a little bit with the fire dragon arc, which certainly provided some fantastic action and entertainment, but was altogether too brief. Granted it would be quite a feat to oppose super soldier Itami and his dream team with war god Rory, Lelei the paragon of wizardry, and a cute elf girl named Tuca. But regardless, it’s hard to stay interested when the main antagonist provides an obstacle that is the equivalent of a wet cardboard box. Seeing Itami or the JSDF fail, even once, may have made the moments where they succeed actually feel like something, but for that we would have needed a intelligent villain. It may have been silly of me to expect quality story writing after the show’s first season, but ultimately I’m still disappointed. I was willing to forgive it for a lot of the problems it had in season one, and even defended it from time to time, but season two took itself so seriously and tried so hard that it lost a lot of its charm. Countless times we are teased with potentially interesting plot threads like a war for resources, the origin of Rory, and a threat of natural disasters (to name just a few), but time after time the show just ignores them. This is all in favor of a terrible attempt at political intrigue, and more bravado from the JSDF which we had more than enough of in season one (we get it, your modern army is really badass, and awesome, and perfect). Basically, don’t watch Gate if you’re looking for a good story. The show provides awesome singular moments, but often fails to follow them up, and never manages to tie them together into anything that resembles a decent or cohesive plot. Gate does have some pretty fun characters, but unfortunately they don’t get nearly enough screen time. I don’t think there is anyone out there who didn’t want to see more Rory Mercury after the first season, but Gate gives us woefully few moments to cling to. The story is probably far too ambitious with its roster, which sports an enormous range of best girl candidates, but too few of them get enough attention to appreciate more than their character design and voice acting. There are honestly no excuses here, Gate Season 2 needed more Rory; every moment she’s on screen the show is simply better. If you are still with me,  you may be surprised to find that with all that being said, I actually had a lot of fun watching Gate. The writing may be bad, and the plot may have as many loose ends as your dog’s favorite rope toy, but it’s still a genuinely fun show to watch. There is plenty of good comedy and surprising moments that will keep you on your toes. The animation is good when it counts and character designs are great. The soundtrack also works well, and sports a solid opening and closing sequence. Any otaku will have a tough time keeping their inner fanboy in check with the cast of characters that touches on nearly every fetish known to the genre. Thinking back, it may be quite annoying and forgettable, but in the moment it’s hard not to get caught up in the spectacle of it all. TL;DR: Gate’s second season is filled with the same bad writing and JSDF worship as the first season. If you liked season one for what it was, absolutely continue. If you were hoping for more Rory or that the show would tie up loose ends, don’t waste your time.

Recommended Audience: The opening episode shows the silhouette a female being raped. Otherwise, about the same as season one. Teen or adult.

Gate Season 2 suffers the wrath of the JSDF and limps away with: 2/5 HP.

Think I’m nuts? What was your opinion of the second season of Gate? Let us know in the comments or drop us a line on Facebook and Twitter! 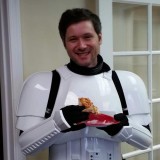 Meet The Writers Part 1: How Logan Got Into Anime!

Join Carlos, Jeff, and Logan as they take a look at what anime are coming out this season and decide which ones to watch! Music:…